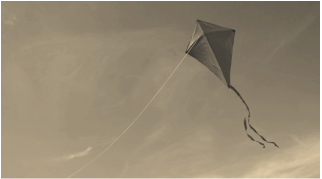 According to the New York Times article, "For Afghan boys and men, kite flying is a way of life," written by Kirk Semple, "kite flying is once again the main recreational escape for Afghan boys and some men."  No longer banned like it was under the Taliban, kite fighting is the most popular sport in Afghanistan.  One kite fighter told the New York Times, "We don't have, like, soccer, baseball or basketball...This is the only game we have every Friday.  That's it."  According to the article, "The objective of the kite fight is to slice the other flier's string with your own, sending the vanquished aircraft to the ground. Kite-fighting string is coated with a resin made of glue and finely crushed glass, which turns it into a blade."

Kite running, according to Margaux Sky's article, "What is Kite Running?" on sportinglife360.com, is "a direct result of kite fighting," and "becomes a sport of its own."  According to Sky, bets are placed by kite runners on who can reach fallen kites first, then they carry the kites like trophies.  Surprisingly, kite running is the most dangerous part of kite running.  Sky claims that "Many people have died as a result of keeping their eyes on the kite and running into traffic only to get hit by a car."

This is all very important information to know while reading The Kite Runner.  It shows how important the kite fighting tournament was to Amir and Hassan.  It also shows how meaningful it is that Hassan would run kites for Amir, since it could be very dangerous.  Reading the book without knowing the cultural significance of kite fighting and kite running could make it confusing, and not seem like a very big deal.  Knowing the background of these two sides of kite flying makes the book's meaning even more special.


"For Afghan boys and men, kite flying is a way of life" by Kirk Semple, The New York Times

"What is Kite Running?" by Margaux Sky, www.sportinglife360.com
Powered by